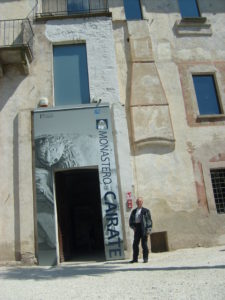 Cairate Monastery’s real name is the Monastery of Santa Maria Assunta and it’s located in the town of Cairate, in the province of Varese.

Seen from the outside, the first thing you see is a large building on two floors which looks like a peasant’s house. However, this is not the case; its appearance is due to the many architectural changes the monastery has undergone.

Cairate monastery is believed to have been built in the first half of the 8th century on the wishes of a Lombard noblewoman, Manigunda. She is said to have built the convent after being cured of an illness by drinking from a spring in nearby Bergoro.

The story is supported by the discovery of a sarcophagus containing female remains and rich grave goods during restoration work on the church.

The building was also the administrative centre for the management of the numerous mills owned by the estate.

Barbarossa is known to have stopped here before facing the Lombard League in the battle of Legnano on 29 May 1176 in which he was finally defeated.

The monastery originally only had one floor but the Council of Trent (16th century) later laid down that each individual nun who took the veil had to have her own cell.

Everything was raised by a floor to create space. In the following century the Austrian government obliged all cloistered monasteries to carry out work which was useful to the community. The sisters adapted by installing a school until 1799, the year in which the monastery was suppressed.

In 1801 it was sold to private individuals. They modified the structure by destroying the cloister and the rooms to make the area into living spaces.

It was gradually abandoned and left to decay until 1975 when the town of Cairate started a slow process of acquiring the properties. The entire structure finally became public property in 1996. Restoration began at the turn of 2001/2002 and finally ended in 2013.

The monastery is quadrangular in plan and is set around the cloister. It is built on two floors with the church is on the south-west side. The section of the complex outside the quadrilateral has been turned into a library and municipal offices by the town.

The monastic complex, the rooms for the nuns and the crypt are behind the church. All are built over the remains of the walls of a 2nd century Roman granary. These were discovered during the excavations for the restoration work and were made partially visible.

The visit can be free or guided. There’s no admission fee but a voluntary donation is requested; the visit lasts two hours.

The route takes you to visit both levels of the monastery. I’d advise the guided tour. Some rooms are equipped with screens which explain the complex’s history and events.

You find out more about its past during your visit as you discover segments of frescoes, capitals and sections of the wall saved by the restoration work.

There’s one very special room on the second floor, the music room.

The first thing that strikes you is the coffered ceiling. The second is the presence of a fresco showing figures of cherubs grappling with musical instruments, weapons and animals. The fresco is around the edge of the ceiling and it’s in perfect condition; there is now a conditioning system in place which preserves the work

The church was initially of the basilica type with three aisles; over the centuries it has undergone many changes to end up as it is today. It is divided in two by a partition wall whose purpose was to keep the cloistered nuns separate from the population.

Look for a niche which served as a kneeling-stool. This has a small opening to allow the priest to give the nuns communion without them being seen.

As well as being an ecomuseum, the monastery is used for artistic and cultural events.

Many of its works have been lent to various museums between Varese and Milan and the plan is to bring them back when all the rooms are ready to host them.

The Manigunda legend seems to be going strong; her ghost is said to still wander around the Monastery. Enjoy your visit!

How to get to Cairate Monastery

Address: the entrance is from the piazza in via Pontida 8.

How to get there from Varese:
Take the SS 233 to the junction with the SP 2; turn right at the roundabout and continue along via Dorligo Albisetti, following the SP 2 to the traffic lights.

Follow the road downhill to the left in the direction of Cairate. When you reach the top of the hill go right and take the first street after the church, Via Pontida; carry on for a few dozen metres to enter the square.

How to get there from Milan:
A8 Milan—Varese Autostrada dei Laghi, exit Solbiate Arno, direction Carnago, and follow the directions for Tradate.