Fisogni Museum of the petrol station 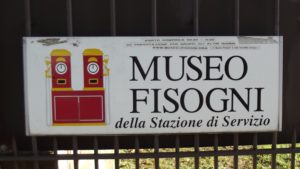 Before speaking about the Museum, I can’t avoid to describe briefly Mr. Guido Fisogni, the founder of the collection.

He’s a man who has been able to reinvent himself in the workplace and he created a company that enlarged during the years, employing a lot of people.

His business activity consisted in building new service stations and maintaining gas pumps; instead of throwing away old fuel pumps and signs, he started to collect and restore them.

The Museum has today the biggest collection in the world of gas pumps and more than 6000 related pieces, and the collection was certified by Guinness World Records in 2000. 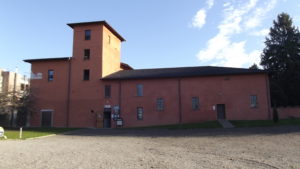 The Museum is hosted in an ancient court house; entering you find immediately the first rudimental gas pumps. The visit hasn’t a ticket, but a free offer is suggested.

You can visit the Museum in about an hour, but if you want to discover every particular of the exposed objects you can stay for more; Mr. Fisogni, in fact, can tell you several anecdotes discovered during the collection of his pieces.

The tour is well organized and it follows a chronological order, and walking through the Museum you can see how the oil field evolved with the increasing of energy demand.

In the Museum there aren’t only gas pumps, but you can see also many barrels for petroleum, oil cans, small and big compressors for tyres and every kind of sign.

One of the most important pieces is the oldest pump of the Museum, a Swiss one from 1892.

The collection has also some unique pieces, like a fuel pump from 1910s located in Buckingham Palace, or the one designed according to Benito Mussolini’s dictates, whose shape remembers the symbol of Fascism.

The visit continues with several surprises, in a room with the meeting table of Fisogni’s company, where he and his staff tackled all that problems that every enterprise meets during its existence; this table has a big showcase which contains a wide range of toys (cars, trucks, service stations, etc.) with the logo of an oil company or a tyre manufacturer.

Proceeding with the tour you arrive in a hallway where you can admire the accurate design of old fuel pumps; nothing was left to the chance; every pump sent a clear message to customers.

Obviously, there is also a room with old fire extinguishers: where there is a potential danger, there are also the instruments to avoid it. Here you can see how these tools evolved over the years.

Also, the collection of original technical projects is unique, with detailed schemes of fuel pumps and service stations. 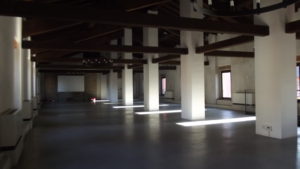 During the restoration of the ancient building, a big room for events was obtained on the first floor: it can host corporate and private events, meals, meetings, etc., with a particular place for caterings.

Even here there is a hint of past history, with a little collection of vintage metal pedal cars: they own to Paolo Frigerio, a friend of Mr. Fisogni.

The courtyard, perfect location for meetings of vintage cars and motorcycles, is the setting for the exhibition of a wide range of signs from all over the world, with the logo of an oil company.

On a wall, Guido Fisogni exposed also the original plates used for the realisation of plastic signs of many companies.

During the visit, he told me he often talk with people working for a petroleum company; they don’t have many of the pieces exposed in the museum, and they would like to buy them for their internal museum, but obviously it’s impossible to split the collection; so Mr. Fisogni is obliged to refuse their offers.

Here there is also a piece of history of motorcycling: a Moto Guzzi “mechanic mule”, built for the “Alpini” in the 1950s; it’s property of Frera Motorcycles Museum of Tradate, but it’s exposed at the Fisogni Museum for reasons of space.

The collection started in 1961 in Palazzolo Milanese, near Milan, where Fisogni’s company was; the first Museum opened in 1966.

It was transferred in Tradate when Fisogni sold the society to a Florence group, and the collection had to be relocated.

Before the transfer, an attentive restoration of the building was planned; this work is documented in a photo gallery on a panel, exposed in the Museum.

From 2015, the Fisogni Museum of petrol station is officially located in Tradate.

The structure is also part of the circuit “Varese Motorland”, an association in the Province of Varese which promotes motorbike tourism.

The museum is also wheelchair accessible with ramps and a lift.

Have a nice visit!

Thanks to Marco Mocchetti (Museum’s responsible for collaborations and events) for the English translation).

How to reach the Fisogni Museum:

How to get there from Varese:

Take the SS 233, at the 3rd roundabout in Tradate turn left in the direction of centre, in via G. Bianchi, after 50mt the Museum is on the right side.

How to get there from Milan:

Turn on left and follow the direction to Varese on SP233, cross Locate Varesino and remain on SP233; when you reach the second roundabout after the one with a plane, turn right on Via G.Bianchi, after 50mt the Museum is on the right side

In winter open only by reservation.

The medieval village of Castiglione Olona