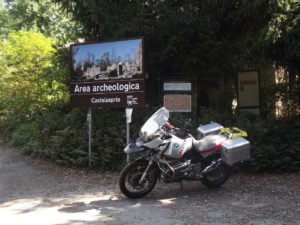 Three sites in one; as well as the historical remains, there’s also a splendid natural, verdant setting which acts as a background for the site’s historical and cultural riches. The site is also protected by UNESCO.

The complex consists of the church, the archaeological area and its excavations, and the antiquarium.

The antiquarium is the area in which the collection of archaeological material from the site itself is arranged.

This huge chunk of history, culture and religion is hidden by thick, lush vegetation. It’s not visible from a distance and the only way to see it is to visit the site. As you approach, the road leading to it increasingly narrow and wooded, so adding a hint of mystery to the remains hidden in the woods.

The first thing you run across at the end of the road is the custodian’s house. It’s a good idea to either park inside the square by passing through the barrier, or to leave the vehicle on the left. 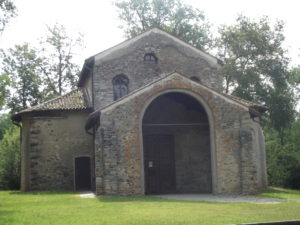 To make a good tour of the site I recommend starting from the church, keeping to the outside of the boundaries of the custodian’s house. In order to reach it you need to keep to the left and follow the paved road; it’s not immediately visible due to the dense, luxuriant vegetation and you have to walk for about 200 metres.

The church is on the north-western edge of the village in a slightly elevated position.

Seen from outside it’s small and solid and has three apses over a rectangular plan. Its orientation is due north, with the entrance to the south, and it’s on top of a hill.

Inside, you can admire the central apse, which is decorated with frescoes depicting the childhood of Christ inspired, amongst other things, by the apocryphal gospels. You enter through a small door and you have to bend down to enter.

It was the subject of archaeological excavations and surveys between 1980 and 1997. Studies were systematically carried out between 1981 and 1983. Research has revealed that the church was built over a Bronze Age necropolis.

As you wander around you notice sections of a small quadrangular space (north side) where there is thought to have been a small sacristy and there are the remains of burials.

One burial is special; it is thought to be that of an important person of the time because a cross-shaped sword is carved on the tombstone and the clothes were woven with gold thread.

The church had also undergone some fortification work. It has a ditch about 5 metres wide and 3 metres deep. There is still some uncertainty about the dating of some of the works inside it.

It has been possible to identify the chronology of the various interventions after its initial construction through the use of advanced technology, and by analysis of the roof tiles.

However, there is still one great mystery about the church: “When was it built?”

It’s not yet clear when it was built. There are ongoing studies which have not yet been completed. What is certain is that the building was somewhat reorganised in the Carolingian period (8th–early 9th century AD). It must, therefore, be older. 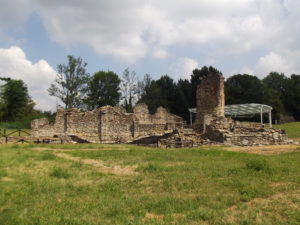 The ruins of the Castrum can be accessed from the courtyard of the custodian’s house. Deforestation work in 1944 revealed the church and the archaeological park.

The park was established in the 1950s after being brought to light by the continuous deforestation work. This led to the ruins of other churches being discovered.

The park is located on a plateau, at an altitude of about 350 metres above sea level, overlooking the Olona valley. Like the church of Santa Maria Foris Portas, studies and excavations have revealed that the site has been inhabited since the Bronze and Iron Ages and that the village was fortified (between the 4th and 5th centuries AD).

The entrance avenue skirts the supporting piles for the bridge which used to be the way into the Castrum. This was also where the watch tower stood.

The materials chosen for the buildings were not particularly fine materials, but some attention was paid to the places of worship.

You can follow a set route inside the netting which cordons off the excavations. I advise you to pay no attention to the numbering but go in a clockwise direction.

As soon as you enter you see what remains of the Basilica dedicated to St. John the Evangelist. This includes a cistern and a well, which was also the base for the southern bell tower.

I advise you not to walk around it; it’s better to keep to the left and see the foundations of a tower and the ditch which defended it.

At the centre of the complex you can see the basilica of St. John’s cistern, which still holds water, and the adjacent well.

The covers dedicated to the protection of braziers and the research excavations.

If you follow the signs you’ll reach the church of St. Paul, one side of which is very well preserved; there are some architectural details to see on its inside.

This is a special building created from what is thought to have been a convent of San Giovanni. It was probably a 13th century Franciscan hermitage  (14th – 15th century) and a pathway through the site’s chronological “stages” has been set up inside.

The first hall is the entrance in which you can admire the large model reconstruction of the fortification’s walls which included the Castrum and the village of Torba. You can appreciate just how large an area the Castrum covered here (over 9 hectares).

Continuing the visit, the first hall also contains the remains of precious frescoes which were recovered and placed in this building for safety. The rooms show the chronological development of the Castrum, from the late Roman period until the 17th century.

There is a remarkable sixteenth-century fresco by Gattinara depicting the entombment of Christ.

There are other splendid artefacts from the late ancient–early medieval period: crockery and soapstone containers, glasses and glass lamps plus

fragments of frescoes covering a historical period from the 11th to the 17th century and architectural decoration from the churches. 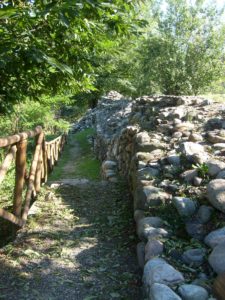 When you leave the Antiquarium you will be able to admire a large section of the walls.

Going left, following the fence, you reach the walls which separate the Castrum from Torba monastery and which follow the entire upper edge of the plateau.

If you follow the walls, you can see other ruins: a medieval house, the remains of a fortified house and the ongoing excavations.

RUINS of the FORTIFIED HOUSE and the TRAPEZOIDAL HOUSE

From the path around the walls it’s easy to get some idea of how imposing the structure was, of where the walls joined the watchtowers, and of these towers’ entrances.

I advise making your visit in good weather in spring or autumn in order to enjoy the site more.

There are other ruins which are under archaeological investigation including the fortified house about 150 metres away from the path leading to the Antiquarium.

There are the remains of simple houses, and there is a large green space in the middle where you can appreciate the full extent of the site. Walking on the walls is strictly forbidden. You can cross them by using the wooden bridges specially built for this purpose.

The visit takes about three hours and admission to the site is completely free, including the Antiquarium.

There are some toilets for visitors inside the custodian’s house and there is a picnic area outside, with tables and benches.

Discoveries are still being made on the site. Excavation work is regularly carried every year in July by the Catholic University of Milan and the archaeological park is constantly being expanded. Enjoy your visit!

How to get there from Varese:
Take the SS 233 until the junction for Ceppine, turn right at the roundabout and then take direction Castelseprio. Follow the SP 42 to the top of the slope and keep to the right until you reach the entrance of Via Castelvecchio on the right. There is a large wrought iron sign just before the church which gives directions for reaching the site.

How to get there from Milan:
A8 Milan—Varese Autostrada dei Laghi, Solbiate Arno exit, direction Carnago, and follow the directions for Castelseprio.

Note that there is a car park for buses and camper vans about halfway down the road, when you see the prohibition for heavy vehicles and you reach the junction with Via delle Robinie.